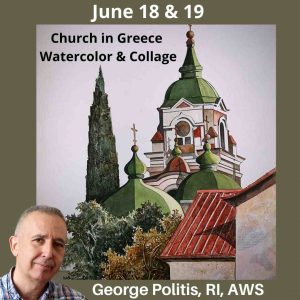 The combination of collage and watercolor enhances the textural effects. It gives more chances to create interesting, beautiful and lively shapes and contrasts and definitely more depth.
We will examine the various papers we can use, from oriental ones to simple tissue paper found in every house.
This painting features a church in My. Athos in Greece.
We will discuss:
Composition
Collage
Watercolor on collaged paper
Choice of papers
Choice of watercolors etc

The class is live and interactive on ZOOM

Price: $178 for 6 hours. If you can’t attend, you can buy the recording only. Book the class and email us to let us know you won’t attend. 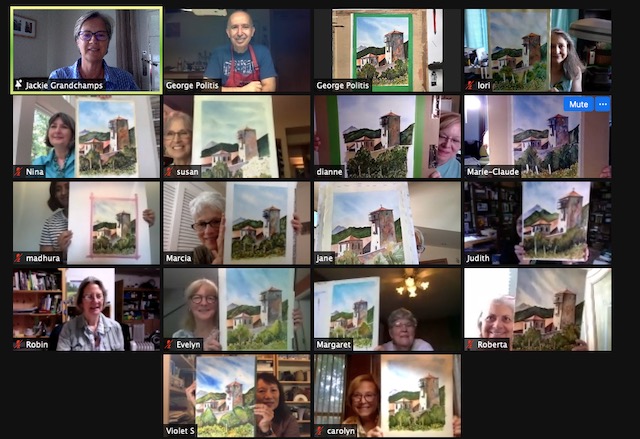 What you will learn in this class: 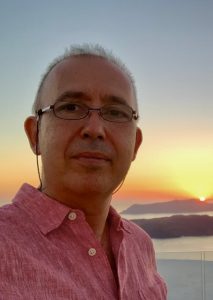 George Politis paints in watermedia and lives in Thessaloniki in Greece. 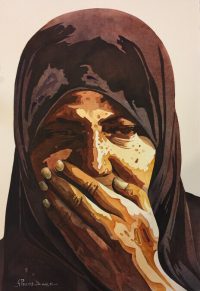 Testimonials from our VIEWers

“Wow! George Politis’s workshop was fantastic: the composition, George’s unified yet varied palette & range of textures are amazing! I’m still invigorated by his workshop – what amazing sessions!!! Please pass on my great appreciation for his superb instruction, demonstration & passion for the topic.”

“It’s hard to pick a favorite instructor when there are forty outstanding artists teaching on V.I.E.W (Virtual-Interactive-Escapade-Workshops) – certainly George Politis has got to be one of the top! Beautiful selection of recommended paints to explore, and he provides power points (so you can paint and not worry about notes), value studies, close up shots – he goes that extra mile in clear instruction. Did you know he was AWS and exhibited in London? One of the best watercolorists in the world and he teaches from his home in Greece.
Loved this workshop and look forward to participating in others in the future. Thank you”.

“I learned so much from George Politis!  He is an excellent instructor – patient, very clear and detailed in his instructions and demonstration.  We are so lucky to have this opportunity to study from such an accomplished artist.  He is so generous with his knowledge.

Thank you Jackie for all the work that goes into the Zoom classes. I will be eternally grateful that we had this opportunity to study and participate with others from around the world. Who knew that the Covid Virus would bring something good into our lives and connect us through art!!! I hope that this internet avenue will still be available as an option as we hopefully go forward into a virus (contained)  world”.